The legendary Maglia Nera (black jersey) was awarded to the rider who finished last each day at the Giro D’Italia. Our new collection is inspired by the mischief and the tenacity it took to turn this into such a noble prize.

The rainbow jersey of cycling’s UCI World Champions. The yellow jersey (maillot jaune) awarded to the leader of the Tour de France. The Vuelta Espana’s red jersey (maillot rojo). These are the most coveted prizes in cycling. They drape their wearer in the glory of victory. But did you ever heard of the black jersey (maglia nera) at the Giro d’Italia?

From 1946 to 1951, the Giro D’Italia awarded a symbolic prize to the last man to finish the race. The now legendary maglia nera (black jersey) was a testament to the will and determination it took simply to compete in and finish a Grand Tour.

The original concept of a black jersey as the prize was inspired by a rider named Giovanni Ticcozzelli, who played professional football with team Casale through the 1920s. During his ill-fated and only attempt at competing in the Giro in 1926, Tico wore his team’s all-black football jersey instead of a cycling jersey.

The Maglia Nera prize came with cash awards, food and drink at the end of each stage, and the adulation of the Italian tifosi. Winning the maglia nera became so sought after that fierce competition developed to claim the jersey. Two riders in particular, Luigi Malabrocca and Sante Carollo,

went to great lengths to see who could waste the most time. They would hide in restaurants and bars or under bridges, or simply damage their own equipment to finish last.

Malabrocca took the prize in 1946 and 1947, the only two-time winner. He became known as the master of delay. He would meander at the back of the race and often stop for espresso with fans, a break that could easily turn into a long, lingering lunch. He was once caught fishing in the canals of the Ticino River! 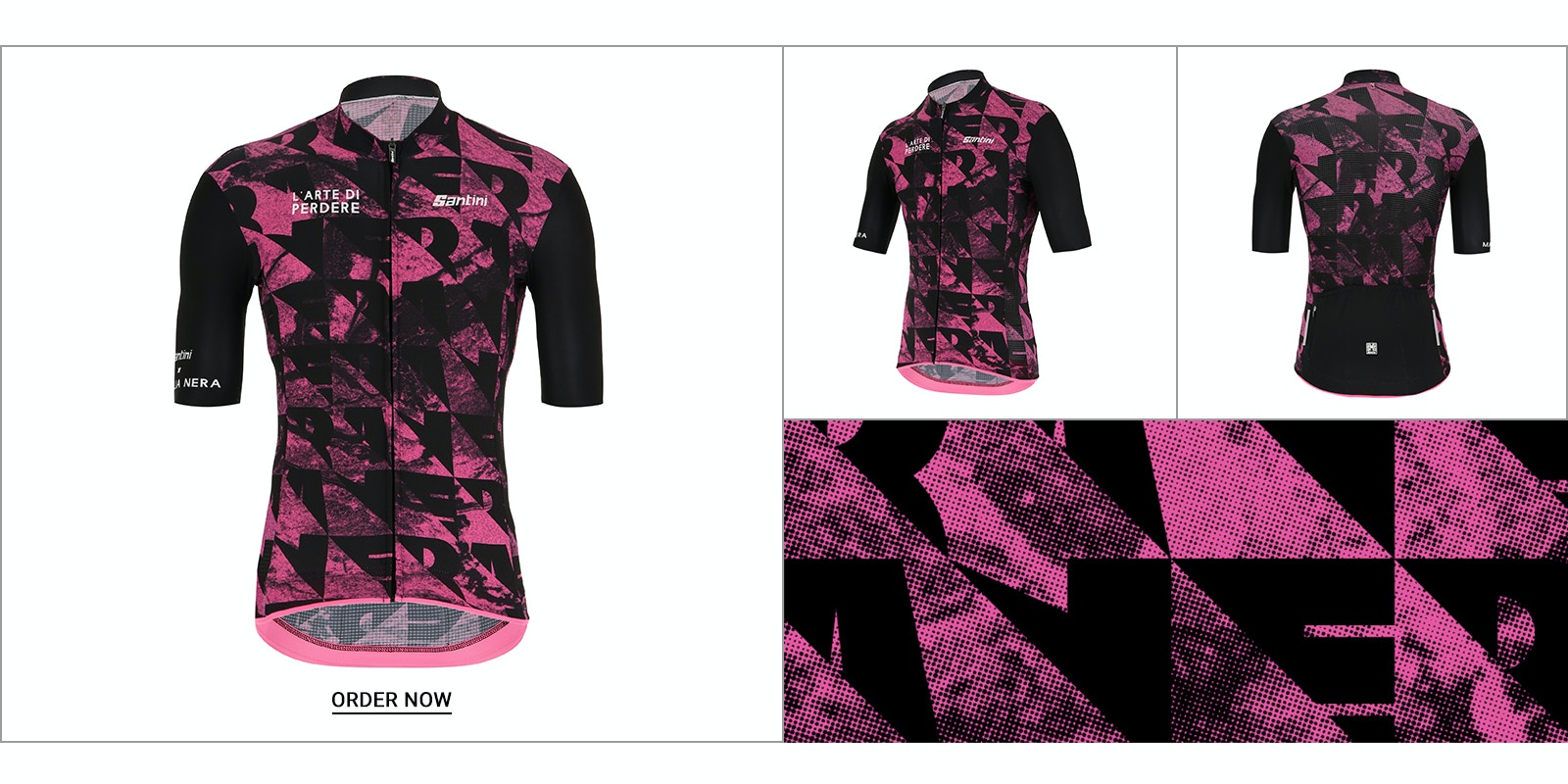 Inspired by the mischief and the tenacity represented by this noble award, we are proud to offer the 2019 Santini Maglia Nera, which we affectionately call L’Arte di Perdere (The Art of Losing). The design incorporates two specific graphic elements, the stylized background image, adapted from a photo of the Passo del Gavia, the cima coppi of this year’s Giro d’Italia and the geometric text pattern repeating the word NERA. Inspired by Ticcozzelli, you’ll find a white star on the sleeve, a homage to Ticcozzeli’s Casale football team jersey.
The collection also includes bibs, accessories, and a tee shirt. 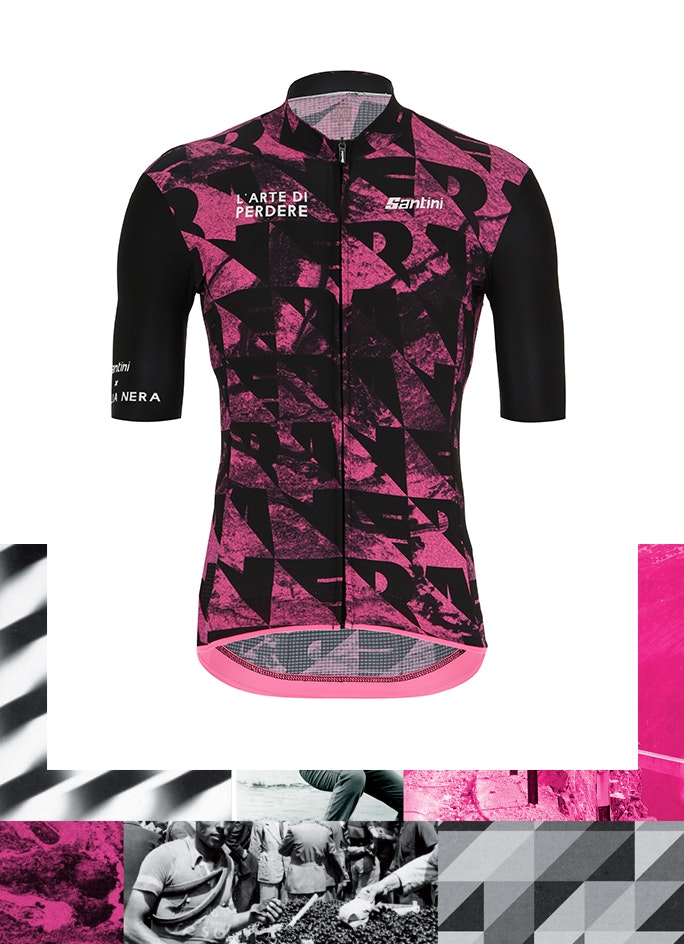 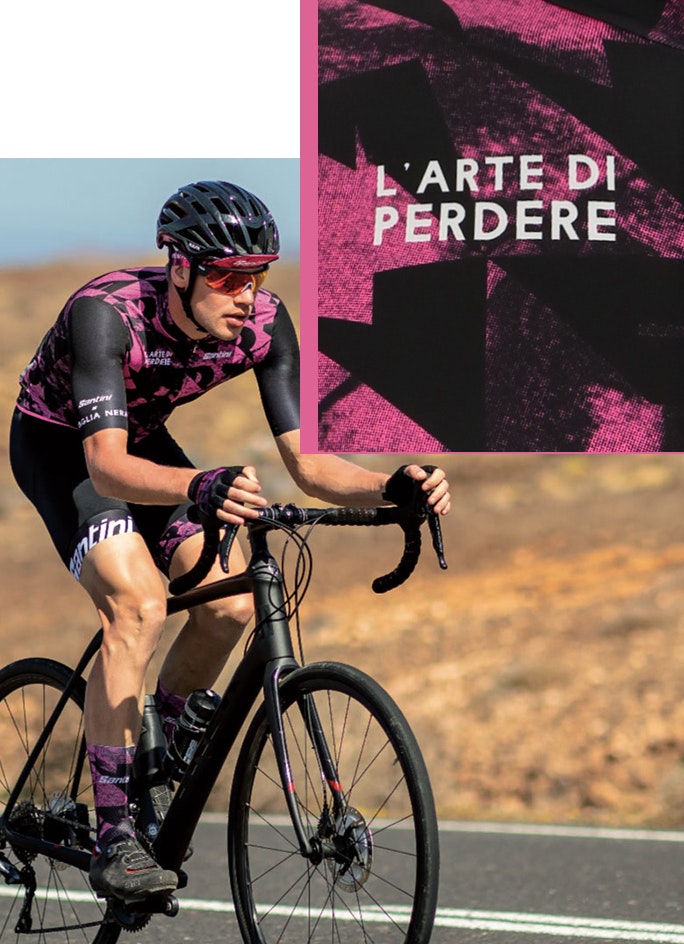 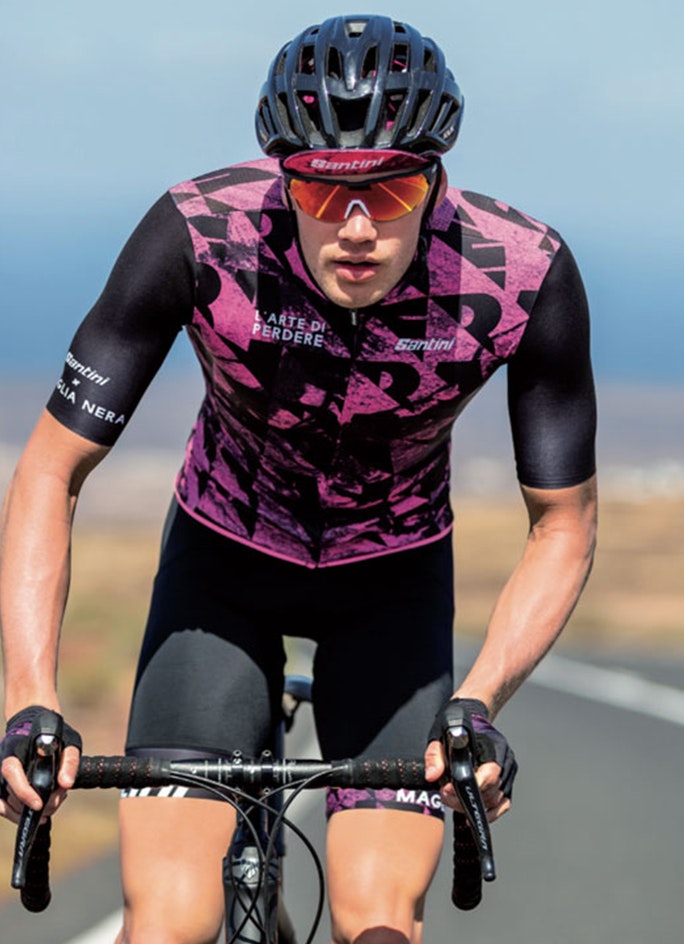